Foals may seem as healthy as can be when they are born, but it never pays to trust your instincts. If you notice that a foal is walking in circles around the mare’s udder and not suckling, or if he starts sucking on walls of his stall instead of looking for food- this could mean trouble! Seek veterinary help immediately if you have any concerns about their condition because neonatal encephalopathy or maladjustment syndrome (commonly known as dummy foal syndrome) is typically an example of where we see these signs.

Neonatal Maladjustment Syndrome (NMS) is a condition that has not been fully understood. It can be found in any foal with a history of premature placental separation, delivery by Caesarean section, or prolonged dystocia. Recent studies have shown an association between NMS and high concentrations of neurosteroids persisting into the post-natal period – these are thought to keep the foals asleep for long periods after birth, preventing them from regulating their own body temperature properly.

Perinatal hypoxia and inflammation may cause central nervous system damage in foals, which is why it’s important to know the conditions that predispose them during this time.

Practitioners have long believed an episode of oxygen deprivation or systemic inflammation before, during, or shortly after birth can lead to varying degrees of tissue damage across multiple organ systems most commonly as signs of brain dysfunction.

It’s very difficult to diagnose a newborn foal early on because they often seem normal for the first few hours after being born, but then show signs of central nervous system dysfunction. These symptoms vary depending on how much inflammation and oxygen deprivation occurred in their brain during birth. 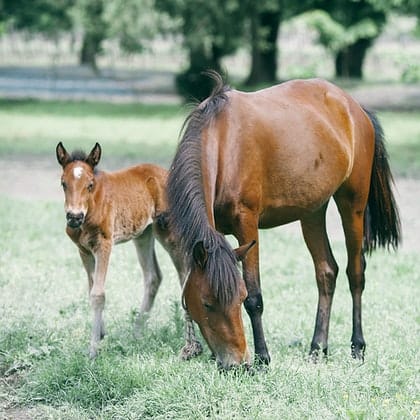 Signs include an inability to locate or nurse from the udder (forgetting), aimless wandering, head‐pressing, weakness at varying degrees; loss of coordination if it is prolonged; hypersensitivity to sounds or touch – anything that would disturb them – depression mixed with chewing/licking stall walls.

What if the foal were to suddenly become unresponsive, while also recumbent and experiencing localized or generalized seizures?

The diagnosis of this condition can be potentially life-threatening; however, it is not always terminal. In severe cases like these, redirection of blood away from less vital organs (1) leaves kidneys and gastrointestinal tract susceptible to having to lead to long-lasting consequences.

The good news is that prompt and intensive veterinary care leads to a quick recovery, with over 90% of these foals. Any expert vet will be able to treat ailing young horses who suffer from seizures. They do this by administering prompt intensive treatment that will result in 70% – 90% recovery rates within 24 to 48 hours after beginning therapy. This allows most animals go through the complete healing process within 5 days without any lasting complications like nervousness or epileptic tendencies. Getting a veterinarian to attend promptly is important. This is because if the foal doesn’t ingest the ‘first milk‘ – colostrum – within the first 12 hours after birth, he will not have enough antibodies to protect him from diseases like septicemia and pneumonia. Serious blood-borne bacterial infections can sometimes be fatal for a horse. In some instances, the veterinarian may need to tube feed the mare with Banamine (an anti-inflammatory medication) or Kaopectate (antidiarrhoeic).

Early diagnosis of foal disorders can make a big difference in the long-term health and welfare of your horse.

If you notice any changes in your horse’s behavior, appearance, or health leading up to the birth of their child that is unusual then talk with a veterinarian. Depending on how long it has been since they have last had an exam and what was going on at that time will determine if a new examination should be scheduled earlier than usual before parturition occurs.

Scheduling an examination of at‐risk horses earlier than usual gives veterinarians more opportunities to identify subtle changes before they become bigger problems over time; this way, if something is wrong it might not go unnoticed until serious damage has already been done!