Horses are majestic and powerful creatures. Huge, bulky, and swift, horses are a definition of power and strength. They are tall, long animals and are covered with huge muscles. It is quite difficult to determine a horse’s exact strength, but enormous breeds can pull up to three times their weight, which could be about 2,500 pounds or more.

Most of the power of a horse is related to speed as a defense mechanism of some sort to evade their predators. Horses have large enough muscles, which allow them to reach the utmost speed as soon as possible to take off in a hurry when they sense danger.

With that said, a horse’s kick can be fatal and can kill you because of the strength embedded in it. The closer you are to a horse, the lesser the impact of a kick. Although it is advised you never walk behind a horse, if for any reason you must, walk right next to it as closely as possible to minimize the force of any kick.

A horse’s kick can cause severe injuries, ranging from deep lacerations, broken bones, cardiac arrest if the kick hits you on the chest, or even head injuries. Head injuries can become fatal or could leave you brain damaged or with life-altering injuries depending on the impact. Horse kicks can also be severe for other horses or smaller animals that come in contact with it.

Why Would A Horse Kick Me?

Horses are not very aggressive creatures, even though aggression is a normal part of their behavior. They tend not to be aggressive around their owners or people they are familiar with. New horses may show signs of aggression when they are around people they do not know, so it is best to tread cautiously.

Also, horses may show some aggression towards one another or other animals, both familiar and unfamiliar. They could also become aggressive due to terrible experiences with such animals in the past. You must remember that there is always a potential for a horse to be aggressive, and this is mostly due to fear, so when you are around horses, watch out for anything that could evoke fear and prevent it.

Horses generally kick with their legs as a form of defense to keep away supposed threats or to stop something or someone from coming too close. A horse may kick when it feels another horse is getting too close to its foal or its food. It may also kick to rid itself of discomforts like flies biting around its belly or legs, prickly grasses tickling its legs or belly. Horses also kick when they are excited and are in high spirits, probably because they have been let loose in a pasture or when they are playing with each other. In such a case, the kick is not really powerful as it does not stem from fear or a feeling of being threatened, but it could still hurt you if you are within close range for it to connect with you.

Horses may also have their kicks aimed specifically at you. It could be because they are not familiar with you, you moved suddenly or unexpectedly and startled them, they are in pain and mistakenly kick you or assume you are the cause of their pain and kick at you.

They could also kick you in response to what you are doing to them, maybe bathing them, cleaning out their hooves, or trying to tie their saddle. You can get kicked while being thrown off a horse as it is bucking or because as you fall behind it, it experiences shock, which might make it to kick at you. Some horses might kick while feeding, and if you are nearby, you can get hurt.

See also  Why Do Horses Sleep Standing Up? 10 Tips for Sleeping

Warning Signs Before a Horse Kick

Apart from knowing situations that may bring about a kick, it is sometimes possible to sense before it happens that a horse will kick as its body language can be read to predict that a kick is coming. A major warning sign is ears that are pinned to the back.

Usually, a horse that is okay and happy will have its ears kept straight up, so when you are around one, and you notice that its ears are pinned back, flattened against its head, it is a sign that the animal is feeling threatened or angry.

Swishing its tail continuously from side to side can also mean the horse is agitated and may kick out soon enough. If the threat is not resolved or its fears are not allayed, the horse may shift its weight from one leg while lifting the other one in readiness to kick. Recognizing these signs can help you save the situation and prevent a kick.

You can stop a horse from kicking by leading it away from where or what is making it feel threatened. The attention of the horse will be diverted, and since it has to drop its leg to take a walk, you might be able to stop an oncoming kick.

Kicking can become a real big issue when a horse turns it into a habit.

A horse’s kicking can be dangerous for the handler or rider (1) as they will be in danger of being injured. Some horses become agitated and tend to kick when another horse is ridden too close to them, and this is especially common when the horse is ridden in a crowded area or in a group.

Some other horses do not like cats or dogs and kick at them when they get too close. Some horses just kick out in defiance and disrespect while some others kick when they are within the confines of their stall, and they are impatient or bored. Some horses that have been hurt when they were being saddled up tend to kick out when they are being saddled because of the bad experience they had. All these become a problem when it turns to a norm for the animal. 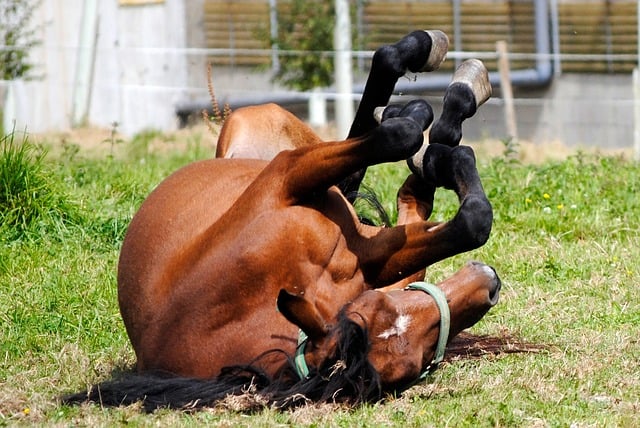 If you want to deal with such horses, you can teach them to respond to leg aids. Leg aids are mainly used as a driving aid that asks the horse to move its hind leg forward. It is less likely for the animal to kick when it is moving forward, and should another horse come too close to it; you can easily control its hind legs, so even if it kicks out, it would not be able to reach its target.

Also, a red ribbon can be tied on the tail of a horse that often kicks to serve as a warning sign to people, especially when it is in public. Everybody that has to work around the horse should be informed of its habit so they can be alert and on full guard.

Avoiding the hindquarters of the horse is also a good measure to take. Some horses may kick when riding in a group. Therefore, if you are riding with such a horse, you should keep some distance if you are behind so that you would not be in the space in front of it and you can prevent it from kicking out.

Always approach or walk in front of horses where they can see you, so you do not startle them, especially if you are not familiar with the horse. Getting comfortable and familiar with horses does not mean you should forget safety precautions; it is best to be aware of your surroundings to ensure the safety of yourself and your horse.